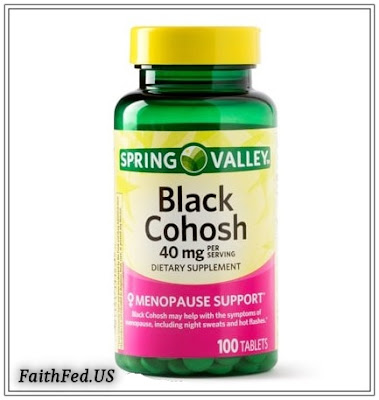 In summer of  2018, I developed a brachiocephalic blood clot. In a short bit of time, my arm swelled to an incredible size, all the way to my fingertips. Not a lot of pain, but still quite uncomfortable.
At the hospital, I was put on thinners and scheduled for a follow-up exam a few days later. During that exam, while going through the meds I was taking, none of which were prescription, one in particular caught my nurse practitioner’s attention...Black Cohosh. I’d been taking it for a couple years. It successfully helped alleviate both menstrual discomfort and the hot flashes that menopause produces..
It didn’t get rid of the symptoms, but it did decrease their longevity. I’d been taking it since my late 40s, and had never had a negative reaction to it. However, my np pulled up some web-info stating that Black Cohosh was believed to have the potential to cause blood clots and determined to be the culprit behind them in multiple cases of those using the herb, also called snake weed, in study patients.
The nurse practitioner overseeing my care plan ran a web-search on Black Cohosh because she’d read some information previously in which it’d been linked to DVTs (deep vein thrombosis aka deep vein blood clots) in study patients.
Interesting too, was the information that in other study patients, Black Cohosh was determined to prevent clots.
Since then, in remembering my activities on the day the clot developed, I don’t believe the Black Cohosh was the culprit. I believe my activities that day, in conjunction with a condition that developed after two injuries in my teens (thoracic outlet syndrome) was the cocktail that contributed to the blood clot.
Since then, I’m careful to not keep my right arm pressed too tight against my side, in any way that might restrict blood flow. I haven’t had another clot since. I also haven’t taken Black Cohosh since, but that’s due to being proactive, since I’ve had a major clot already.
Although it’s close, my arm has never returned to normal size. It’s mostly only noticeable by me. It also won’t extend as completely as it did prior to the clot. It took a year for it to get back to nearly-normal, which I’m thankful for and thankful no further damage occurred.
This post is just a heads-up, in event you’re using Black Cohosh. It did me a great deal of good while I was taking it, and I don’t believe it caused the clot. However, if you have a history of, or the potential for blood clots, please do some research on the herb before taking it. Better safe than sorry.
VidVentures
I’m still having fun producing ASMR vids for my YouTube and Rumble channels. Still a long-way to go and much to learn before I’m good at sketching and shading but I see improvement and learn new things with each project.
Thanks for your continuing interest and support of my channels. I hope you’ll enjoy this edition to my channel and overlook my “furry” trees!
Shalom from Southern Indiana!
at September 17, 2021