Something a little different for you in this week's edition...

During the mid-1990s, I lived in the heavily forested, rural countryside of Caroline County, Virginia. Our property was part of a large private property owners' association. It was a beautiful, somewhat wild place, situated on what was once a large plantation that had a massive acreage dedicated to growing, harvesting and milling pine trees.

​It was a private property owners association situated between Fredericksburg and Richmond, not far off of I-95. It was a beautiful area. There were five lakes on the 500 acres of property, and my family lived on one of the two largest of them. Once upon a time, the whole place had once been a pine tree plantation. The place had a history, a rather violent and sad one. The ‘big house’ still stood on the main lane entering the property, and story after story was always emerging about ghost sightings in both the house and the nearby family cemetery. Remember the cement pond from the Beverly Hillbillies? They actually had one of those. A small one, filled with black water, sticks, leaves and snakes. I didn’t hang out by the pond. I had a look at it a couple of times, from a very safe distance. I don’t do snakes. That aside, the acreage was really very pretty. The lake my family lived on had a decent beach, with sand running into and under the water for a long stretch into the lake. During the spring and summer, my sister and I swam there almost every afternoon when I got home from work.

What lots hadn’t been cleared to make room for houses were heavily wooded. The roads through the area were mostly gravel, and the property had its own camping area situated near one of the lakes. When the weather was too cool for swimming, we rode mountain bikes, often late at night. The only traffic we usually encountered were occasional herds of deer. That may sound unimpressive, but pedaling in the dark and suddenly having to steer through a herd of deer was intimidating. My night vision was less than best even back then, and we didn’t have lights on our bikes. On a good night we had moonlight and starlight but no bike-light.
One afternoon, late in the fall, I managed to get home from work before dark. My family lived on one end of the main lake and my sister’s family lived on the other. We were the only residents living on the lake shore, on our side of the lake. A few undeveloped lots of woods separated our lawns.
That afternoon, since I had a whole 15 minutes of daylight to burn, I phoned my little sister, and told her I’d be down for a visit shortly. I changed from my scrubs into a sweater, jeans and sneakers and headed out the door to her house. The weather was nice so I decided to walk.
​
My folks’ property had a long, gravel driveway, and was ringed with woods, except at the lakeside. I cleared the driveway and stepped onto the road. The road sat high. A bank sloped down on the left side, and past that a short span of grass stopped where the woods began. It was getting dark fast, I didn't have far to and there was still a fair bit of light to see by. 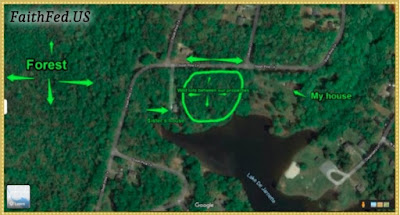 A few strides down the road and I heard leaves crackling in the woods below me. I stopped and looked into the trees. I couldn’t see anything beyond the wood line other than more trees and brambles. I walked a little further, and heard the noise again. When I stopped, the noise stopped. When I started forward again, the noise started again.
I thought the thing in the woods pacing me was one of the neighbors’ dogs. I stopped, picked up a stick from the bank, threw it toward the woods, and yelled, “Go home!” Feeling very brave and in charge, I resumed walking. So did the thing in the woods. I stopped again, and yelled at it again. When I resumed my pace, it kept pace right with me.
My friend in the woods was invisible, but made enough noise for me to know he/she/it was there, and was nearly matching me step for step. In twenty yards, I cleared the edge of the woods and felt much better walking next to my sister’s lawn.
Another 15 yards (or so) brought me to her driveway. No more than five paces into her driveway, and I heard a noise at the woods edge. I looked to my left, and suspended in the shadows past the edge of the trees, were two large emerald eyes, gazing at me. The eyes appeared to be floating in the darkness and were about as big as the palm of my hand, with nearly my hand’s breadth in distance from one to the other. The other thing my startled little brain processed was that they floated higher than my waist. I’m five feet and six inches tall. Green-eyes belonged to something a whole lot taller than I preferred it to be.
Suddenly, my little sister’s driveway was way too long! It took a few moments for my brain to decide the next course of action but thankfully, in mere moments, I was kicking up dirt, moving toward her door as fast as I could.
he light was mostly gone, but I saw her door open and my heart lifted when the house lights spilled out, lighting up the end of the drive.
She stepped through the door and onto the landing shouting at me to hurry up! I had no problem complying! I cleared the end of the house, headed up the stairs and was through the door in seconds. She was right behind me, pulling it shut and locking it.
Then we shared a Kodak moment. I’m not sure which was better, the surprised look on her face or the frantic expression on mine.
When I’m excited, I talk very fast, but I was out of breath and my heart was hammering, so she got a reprieve from the verbal barrage. I managed to blurt out that there was something in the woods. It had big green eyes. It was half as tall as me. Next thing out of her mouth was an exasperated and demanding question, “Why did you walk?”
Between gasps for air, I managed to tell her that it wasn’t dark yet and the weather was nice, and followed by, "Why shouldn’t I have walked and what IS that thing out there?”
“It’s a panther.”
The panther had been sighted in various areas of The Pines for over a week. I worked in Richmond, 30 miles away, and was gone most days. I worked long hours, and usually got in late enough to be too tired to do much other than clean up and go to bed within an hour or so after I got home. If I did go somewhere, I drove.
Because they were worried I’d be stressing about the sightings, I’d nearly ended up being a cat-toy on my sister’s lawn. The thing had even been to her house in the night, prowling around her back deck, huffing and growling, for over an hour at a time. We waited until we were as certain as possible that the coast was clear before she drove me home that night.
Two days later, one of the Pines residents reported they’d seen the cat on the dam-road, directly across the lake from my family’s yard. The dam-road was the levee area that kept the water in the lake, but a spillway under it allowed excess water to flow into the North Anna River. The game warden had reported that Caroline Pines was on the very edge of the panther’s territory. Due to heavy rain that year; its regular hunting grounds were flooded. He’d come to our area to hunt. They’d tried to catch him but hadn’t been successful. We were stuck with him until the flood water in its preferred territory had receded. 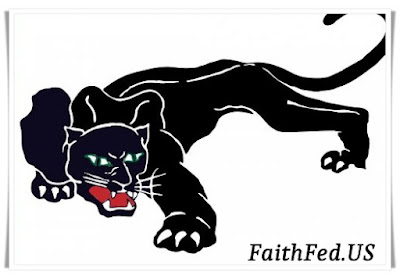 The resident, who saw it that morning at daybreak, said the cat was solid black and about eight feet from nose to tail-tip. It stood for a few moments sniffing the air and swishing its tail, and then it bounded off into the woods, luckily in the opposite direction of our property. I knew we had bears in Virginia. I’d seen them myself when travelling along Skyline Drive in the mountains. But, I didn’t realize they had big cats as well. There must not be many. It was my only interaction with one, and I’m glad I never had to repeat it. The only cats I’ve seen that large since then have been at the zoo.
I discovered, after a bit of research, that there have been other incidents involving large black cats reported throughout Virginia and Appalachia. And, often in the area where the cats were sighted, the sightings continued for a while, and then it moved on. However, while in the area, dogs, cats and other animals went missing. Many were found dead later, having been mauled. I’m so glad the cat only paced and stalked, and never decided to pounce.
And in regards to cats, a while back, another black one showed up one late evening, out in the country. This one actually did try to pounce me. Thankfully, it was a much smaller feline. It was friendly and hungry and I ended up taking it home. It’s been part of our family since then.
His name is Savitch, named in honor of the late reporter, Jessica Savitch, who inspired me to pursue journalism.
He's now two-years-old, and a very busy feline. He loves helping my sister with desk-work. ​He's not allowed outside but loves to help guard our little homestead through the big windows. He alerts with meows when needed and chatters more than a squirrel when he's excited.
He loves naps and treats and cuddles with family and friends, playing hide and seek and watching bird videos on YouTube. His favorite game is stalk-attack-hide, but he's not ferocious or creepy about it. He'll be part of our family for the rest of his days.
We completely prefer him to the green-eyed Virginia stalker!
Hope you enjoyed the short story. The events are all true and I hope to never have a repeat of them.
“O Lord, you are my God; I will exalt you; I will praise your name, for you have done wonderful things, plans formed of old, faithful and sure.” Isaiah 25:1
Shalom!
at August 27, 2021

Email ThisBlogThis!Share to TwitterShare to FacebookShare to Pinterest
Labels: #MustRead

Please turn off your AdBlockers ❤️

I know ads can be a pain, but my site will never be ad-saturated. The few I have placed help me generate income for my blogging business. Thanks so much for your visit and allowing me to display them while you're here. 😊